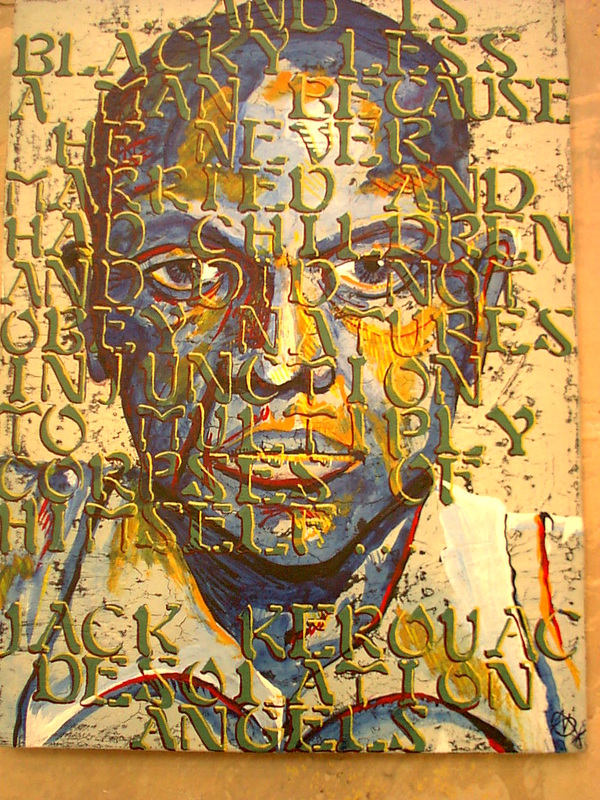 This is an older painting of mine. I got fired up one weekend, and spent 15hrs nonstop putting it together. It stays in my personal collection, although I have offered to sell it from time to time. I still am not sure exactly how it came to be, although it remains one of my favorites.

Below is my mannequin. She was an adventure into 3 dimensional painting. I had originally intended for there to be 4 of them, one for each element. She is 'Fire'. I don't know yet what the marketability of large painted mannequins will be. She currently resides in the front window of Hub Telluride. 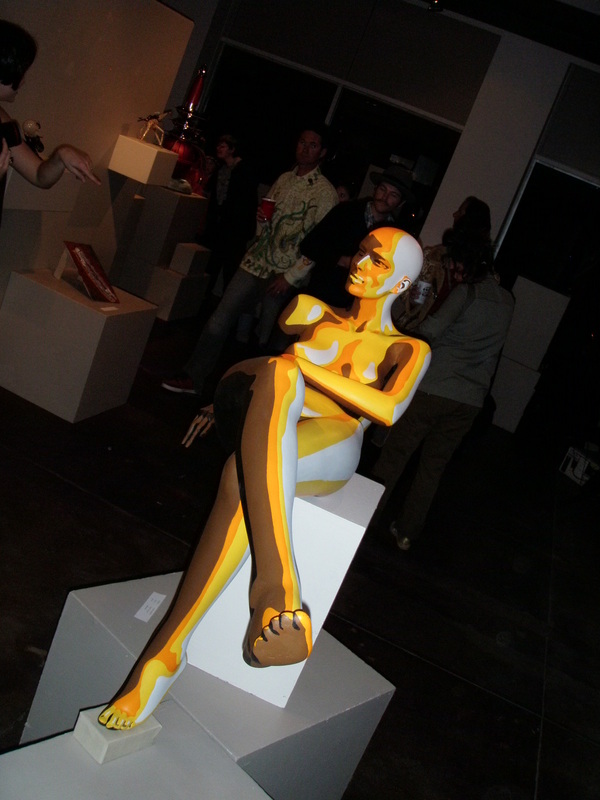 Tape Art. Max brought tape art into my life a few years back. It is a great media for simple transient artwork, and is fun for almost anyone to participate with. I do not know what I am doing most of the time, I just stay close to the wall and drag lines around. This is a small representation of some work that I did in a friends studio. I have done bigger pieces as part of backdrops for other art, and various little experiments when the bug gets to me. There have been a few pieces I have done in Telluride, most are in private residences, and a few of the public ones are long gone. But who knows when they could pop up again. Wanna go tape something? 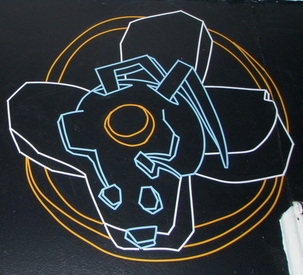 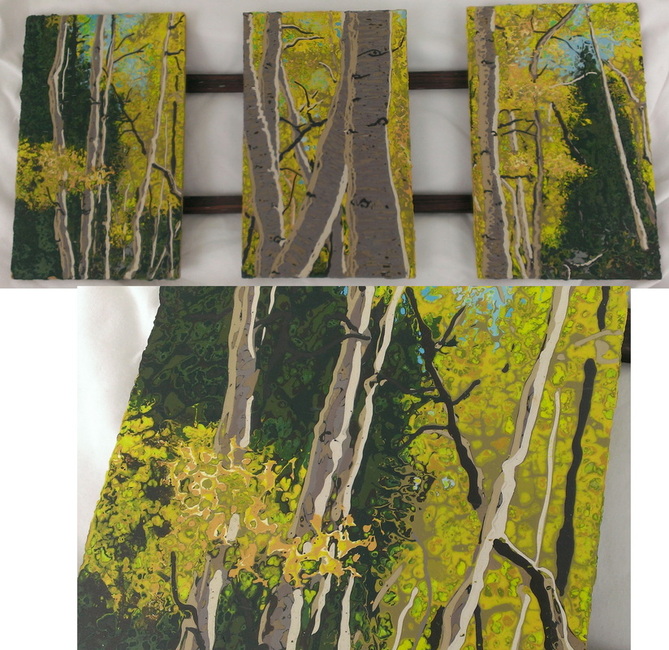 One of my current paintings. I was working with the overall concept of painting, and what I could do to create something a little different. I decided that the plan was not to come up with a new image or representation in my paintings, but rather to approach it from the aspect of how the paint was applied. The images that I paint are made of a thick layer of built up paints, which is then sanded back to a smooth finish. The result is similar to oil on water, and gives a look much like classic impressionism. 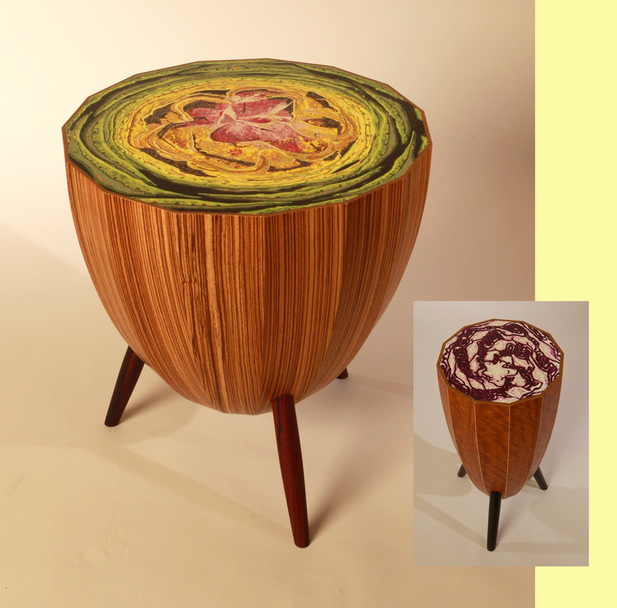 The tables. David Rasmussen, a furniture builder and good friend of mine, approached me a few years back about collaborating on a mixed media piece. The result: Hand laid custom tables, with inset sanded paintings for the tops. These have gotten tons of press and showings, currently the artichoke table has been reproduced 4 times (?). One lives in Germany, and the others have been commissioned by patrons. There is another table variation, that was originally painted by another artist, which can be found on David's website. 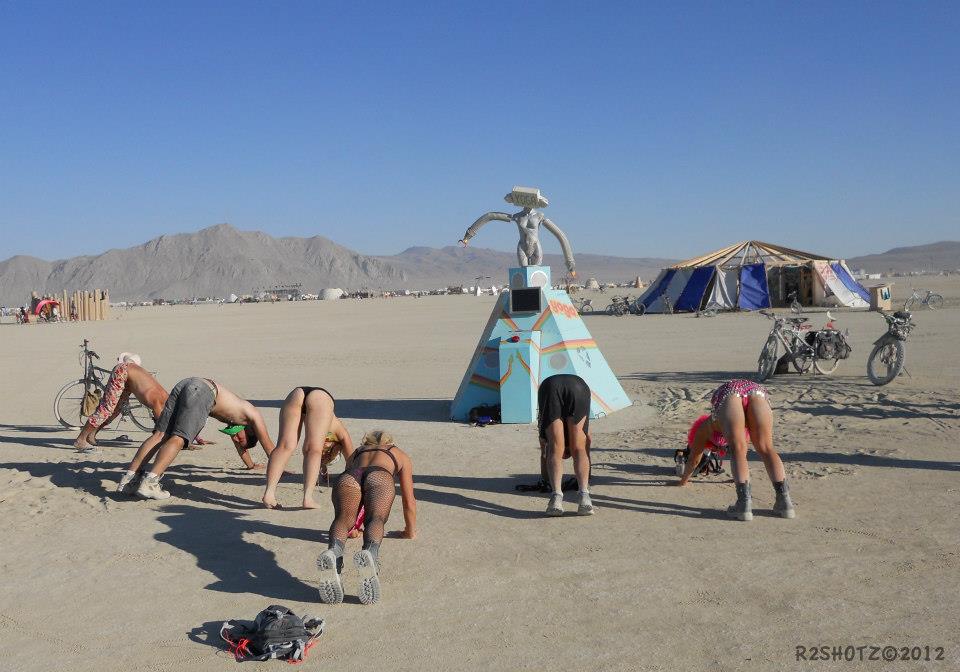 And then there was the Yoga Robot. I don't know that I was ever a sculptor in the past, but last year I came up with a truly silly idea, and 9 months later, there they were, doing what the robot told them to. This was the first of hopefully many art pieces for Burning Man and other venues. The concept is to make art that is fun and engaging, as more of a public service rather than a profitable venture. Taking obscure ideas and transforming them into something that can be interacted with, while also giving the viewer something to think about and contemplate. How does a robot teach yoga? Indeed.
Powered by